Below is the news story from the National Weather Service - Bismarck regarding the EF3 Tornado that struck LaMoure County on July 17, 2011.

Photos and radar imagery are included at the end of this text.

The employees of the Bismarck National Weather Service express sympathy to the residents of Lamoure County affected by this tornado.   We thank the residents of Lamoure County, Lamoure County Emergency Manager, Lamoure County Sheriff, and North Dakota Highway Patrol for assisting with gathering details during this damage assessment. The emergency manager and sheriff of Lamoure County escorted NWS officials and saved the NWS many hours of assessment time.   On Monday...a Bismarck NWS (National Weather Service) damage assessment team surveyed parts of Stutsman...Lamoure...and Dickey counties North Dakota.   Southern Stutsman County...the only observed damage was to trees about 3 miles west of Sydney...along county road 38. The damage was consistent with high thunderstorm winds around 70 mph.   Northern Dickey County...no damage was observed. A tornado observed Sunday evening 3 miles north of Fullerton impacted no structures and so did no damage. This was a brief touchdown of the tornado in a field.   In Lamoure County...very significant tornado damage was observed. An EF3 tornado struck Lamoure County on Sunday, July 17, 2011.   Event...tornado   Deaths...none   Injuries...1 (one) minor   Tornado rating...EF3 (high end / upper bound EF3)   Associated wind speeds...maximum 165 mph   Location...touchdown 7 miles southeast of Nortonville, moved southeast, and lifted 6 miles south-southeast of Berlin   Path length...15 miles   Path width...maximum 1/2 mile   Time...estimated 605 pm CDT to 645 pm CDT   The tornado touched down near the intersection of 62nd ST SE and 86th Ave SE. It moved southeast across Russell...Wano...Henrietta and Badger townships before lifting near the intersection of 76th ST SE and 94th Ave SE. It passed just to the west and south of the city of Berlin.   There was damage all along the tornado path. No fewer than five farmsteads were impacted, one farmhouse damaged beyond repair and one completely destroyed. Numerous power poles and trees along the path were snapped. Hail as large as hockey pucks, 3 inches diameter, fell along and outside the tornado path.   Some of the worst damage...   Along 71st ST SE...a farm house was completely destroyed and debris strewn through fields. Outbuildings were destroyed. A van parked in the home’s attached garage ended up about 500 feet away, destroyed. A pickup truck in the same garage was found nearly a half mile away and was almost unrecognizable as a motor vehicle.   Along 86th Ave SE...a farm home was damaged beyond repair with the roof and garage torn off and one wall collapsed. This is where the injury occurred. Outbuildings were destroyed. Farm animals were killed.   Along 93rd Ave SE...a farm home had damage but it appeared the tornado did not directly hit it. However, outbuildings were demolished and vehicles and farm equipment inside ended up hundreds of feet away, in one case about 700 feet away. Debris was strewn for a few miles to the southeast, the direction of tornado travel. This property had a significant number of very large hard and soft wood trees. Nearly all were either uprooted or snapped. In one grove of trees the violent nature of a tornado was evidenced by the twisted trees.   The rating of a tornado is based on the damage done. From that damage the EF rating is assigned and from that EF number the wind speeds are determined.   Enhanced Fujita scale for tornado rating…   EF0...65 to 85 mph EF1...86 to 110 mph EF2...111 to 135 mph EF3...136 to 165 mph EF4...166 to 200 mph EF5...over 200 mph   Tony Merriman - Senior Forecaster

Photos Taken of the Tornado Damage 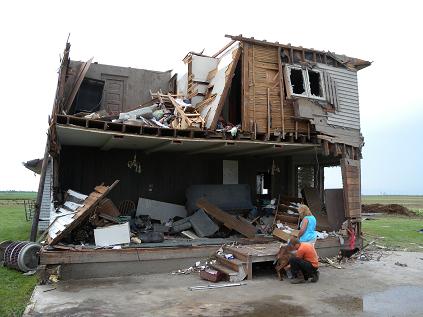 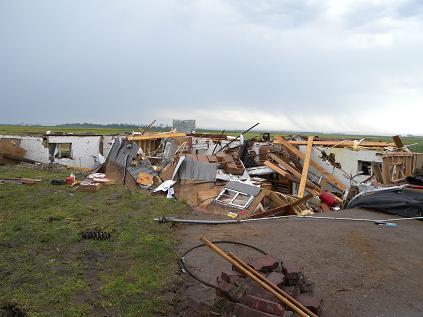 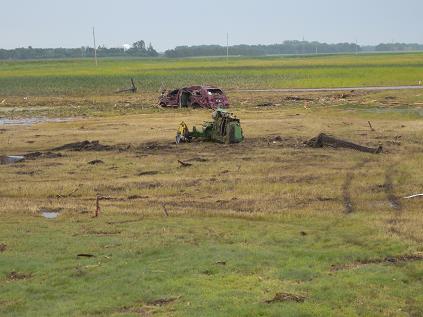 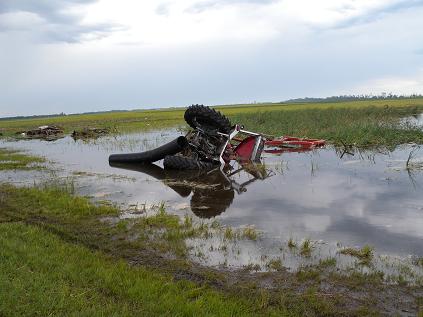 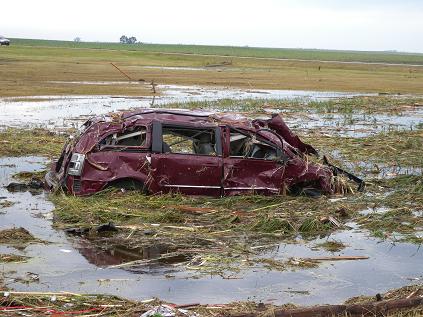 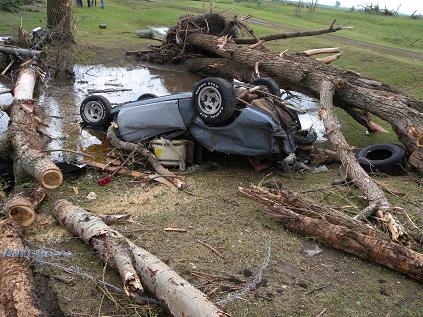 Radar Imagery of the Tornado.

Reflectivity Imagery on the Left, Velocity Imagery on the Right.  Classic 'hook' reflectivity signature, combined with strong gate-to-gate wind shear on the velocity data (indicative of very strong rotation and strongly suggesting a Tornado). The first two images are near the time of the intial tornado touchdown. The tornado moved southeast.  The last two images show where the tornado tracked just west of Berlin. 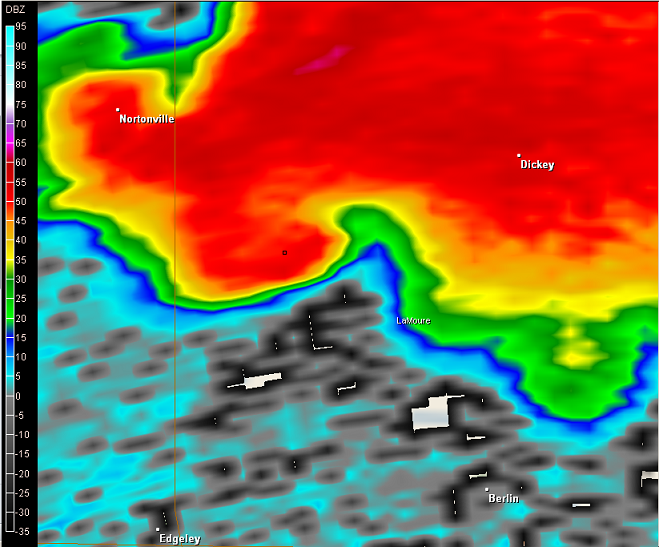 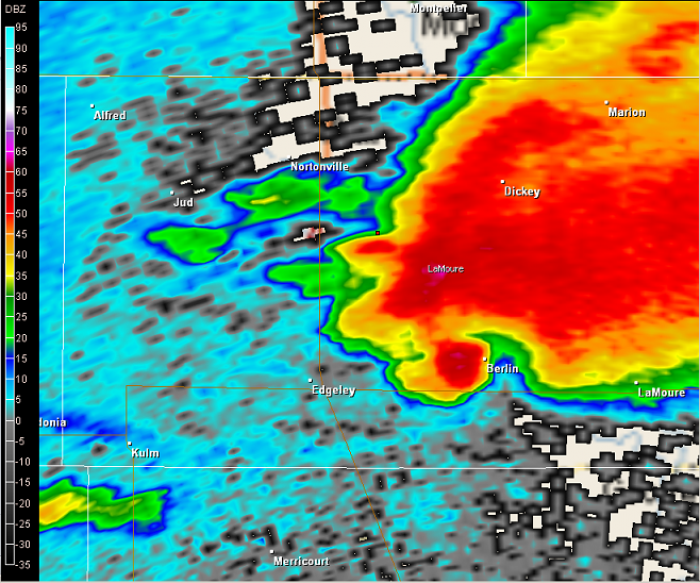 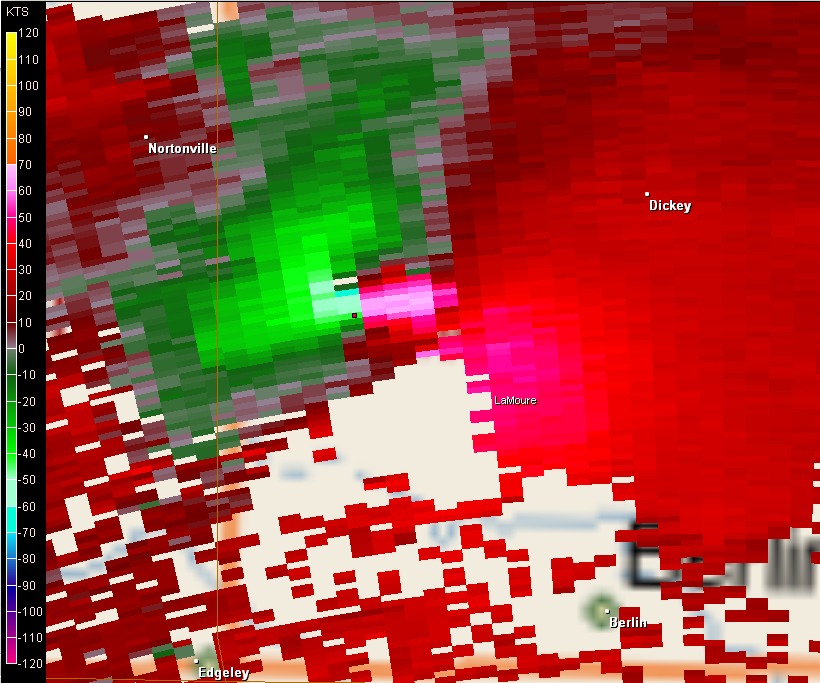 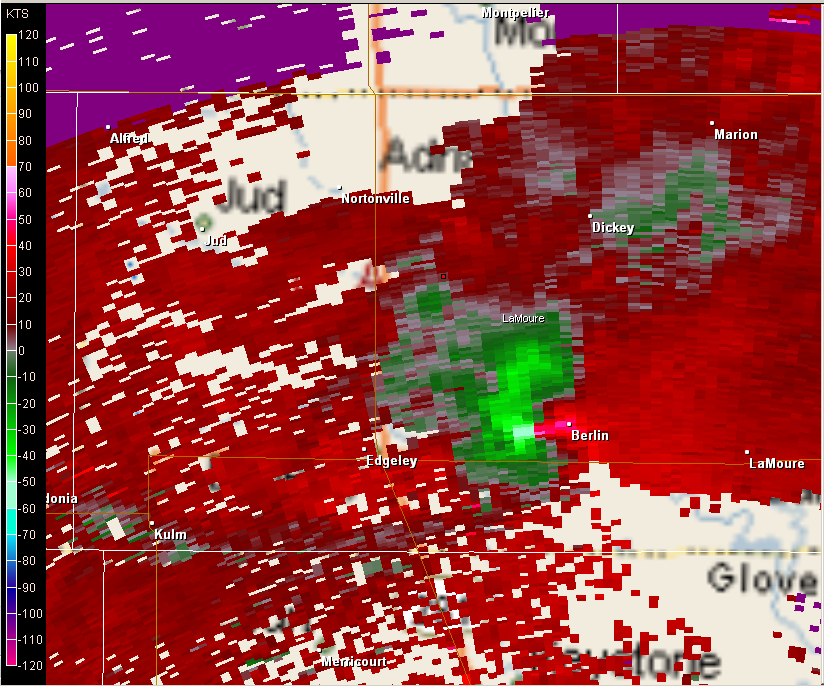 Check out some video of the tornado on YouTube:
http://www.youtube.com/watch?v=mDlr4PI7bwU

Make a secure payment to LaMoure County utilizing the Official Payments System.  For more information and instructions, go to the County Treasurer page.